Tesla Robots and Mars – The Connection

I was recently mulling over Tesla’s announcement (2021 AI day) that they would be working on building humanoid robots.

Given how clearly Tesla have focused on their original mission, quote: 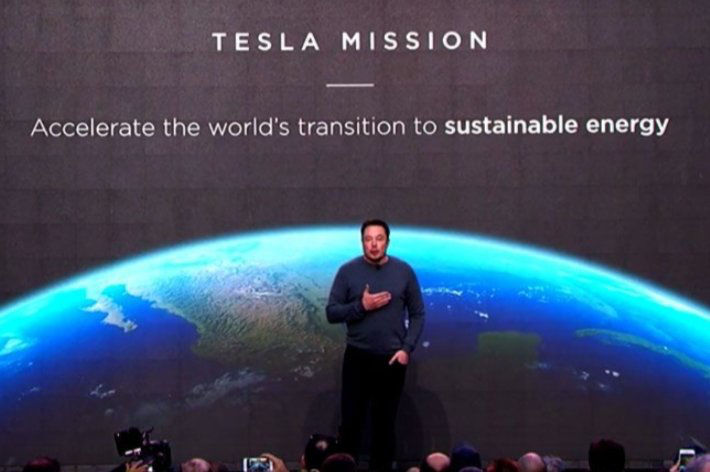 The move to make robots seems somewhat odd initially. Why not continue with laser like focus on:

Especially considering the challenge to achieve their goal of autonomous (self-driving) cars.

A few (unlikely) takes could be:

However, my take is something else.

If we look at Elon’s primary objective – Mars colonization – we can see that at least 1 of his previous companies has actually been a “cover” for a product they need on Mars.

Specifically The Boring Company and their boring machines.

Yes, no doubt Elon was frustrated by the traffic in LA. And yes, I don’t doubt that he believes there is a huge need for tunnels in busy cities that have 2D roads, with 3D buildings.

All that said – I would be surprised if he had pushed as hard as he did on the boring company if there wasn’t this second, ulterior motive. 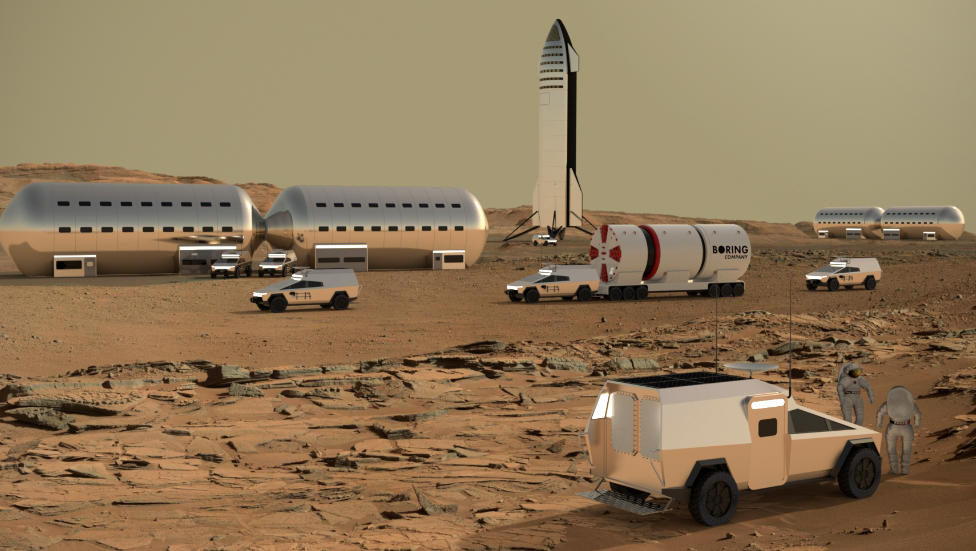 ^ Mars colonization concept with SpaceX and The Boring Company – source

When you get to Mars, you have to deal with a planet that doesn’t have an atmosphere to help protect it like Earth does. This means that there is a level of solar (from the sun) and cosmic (from outside our solar system) radiation that humans are not adapted for.

These forces will more rapidly damage human cells and DNA, leading to quicker degradation than on Earth. Couple that with the lack of breathable air, and the situation is quite difficult for humans.

A long proposed “sci-fi” solution is to build under the Martian soil, in order to leverage the protection of the soil. Once the tunnel is sufficiently sealed, it could theoretically be possible to fill it with breathable oxygen, such that humans can take off their breathing apparatus and “relax” a bit like they do on Earth. 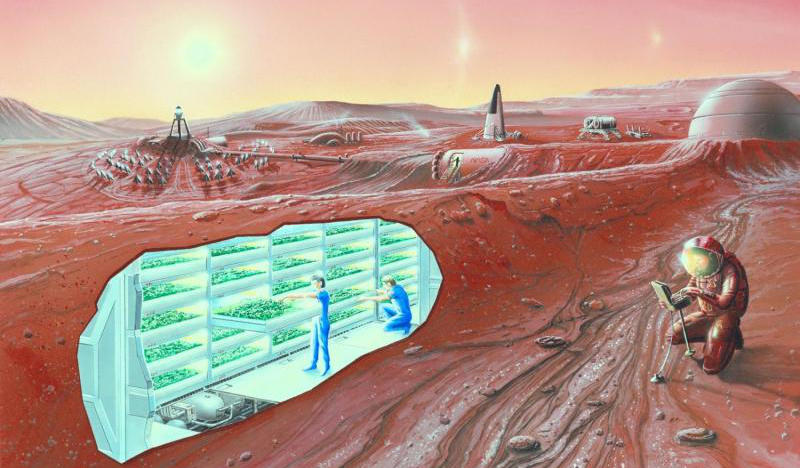 Hence, if he could create a commercial basis for building and improving boring machines, the technology could later be transported to Mars and used to build out the underground habitats there.

It’s therefore no coincidence that “The Boring Company” was spun out of SpaceX and a former SpaceX team member was the initial leader of the project.

Elon even said at an ISS R&D conference that getting good at digging tunnels would be really helpful for Mars (link). 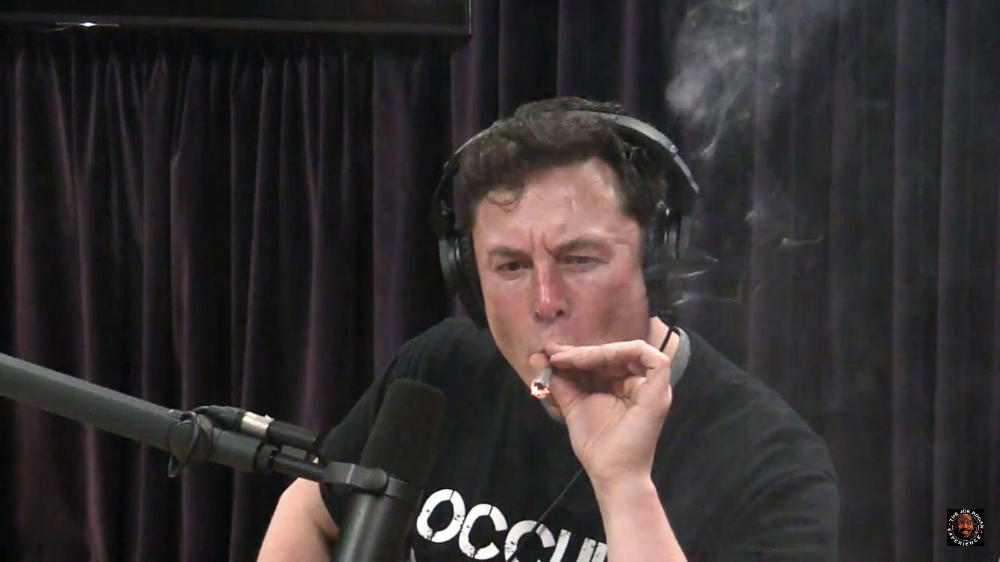 So, coming back to Tesla’s Robot product.

Robots for help on Mars

My best guess for why they’ve decided to go down this path has primarily to do with Mars – whether or not Elon has mentioned that to the team or not.

As we talked about before, the Martian surface is very hostile to humans. Therefore, if you can use a robot to carry out tasks important to the survival of the colony – why wouldn’t you?

They will be useful in:

There’s probably a specific aspect I’m missing here – because I don’t have a good mental map of all the early tasks needed for Mars colonization – however, I’m fairly sure this is the primary motive.

Elon noted on Twitter that he hopes the robots will be sent to Mars in the future: 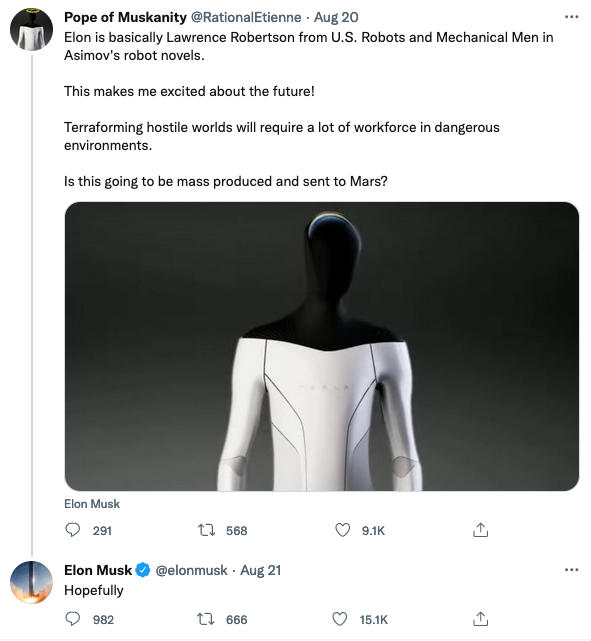 If the robots are primarily for Mars, then why is this Tesla doing the project and not SpaceX? Currently SpaceX have massive demands on their capital reserves from building out Starship and the Super Heavy booster that gets it out of Earth’s atmosphere. Also from all the satellites they are launching to build out their cluster of internet providing satellites called Starlink. As a company they don’t currently make a lot of money, therefore these costs are coming via investors.

It would likely be too much of a financial stretch to start work on robot building through SpaceX.

Tesla, however, have access to more capital through the public markets. Capital that they’re currently investing heavily on the most advanced machine learning training platform ever – called Dojo. It will be using their custom silicon processors that have impressive specifications: 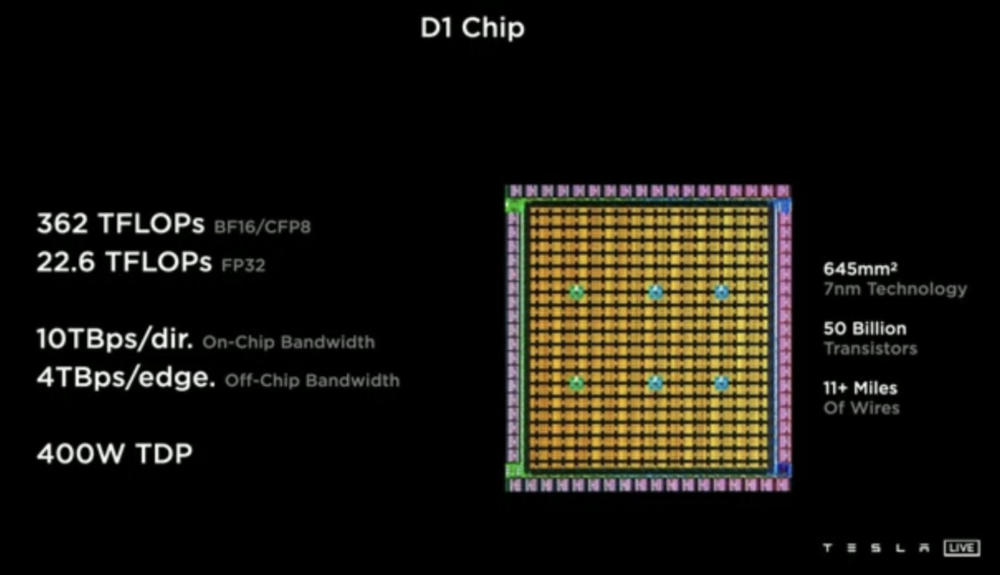 Not just that, but they’re already heavily involved with the robots for their current projects. 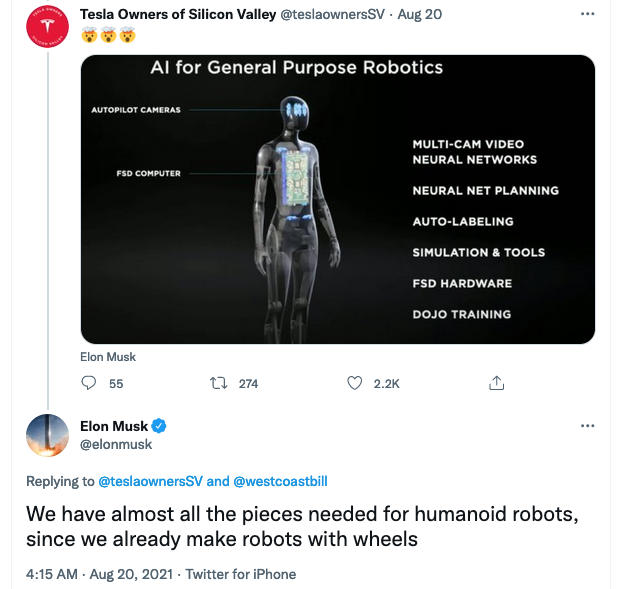 As you can see in the above tweet from Elon, he confirms that Tesla have a strong grasp on humanoid robots already, given that they make them as their main product (their cars are robots on wheels).

In addition to their cars, Tesla utilize a lot of robots for their factories too.

So they have the staff, experience, infrastructure and capital to take on the project.

Perhaps the last key thing to mention as to why this project makes so much sense for Tesla to take on relates to batteries.

Tesla are the world’s leader in lithium ion batteries. Not only do they make the best batteries, but they also have the biggest battery production capacity.

You can imagine how important this is for robots, who will only be able to stay on as long as their battery lasts.

Tesla’s competitors will (generally) have to procure batteries from elsewhere, whereas Tesla have the production and supply “in-house”.

This gives Tesla an advantage in terms of battery capacity and cost.

However, there is a secondary potential motive. 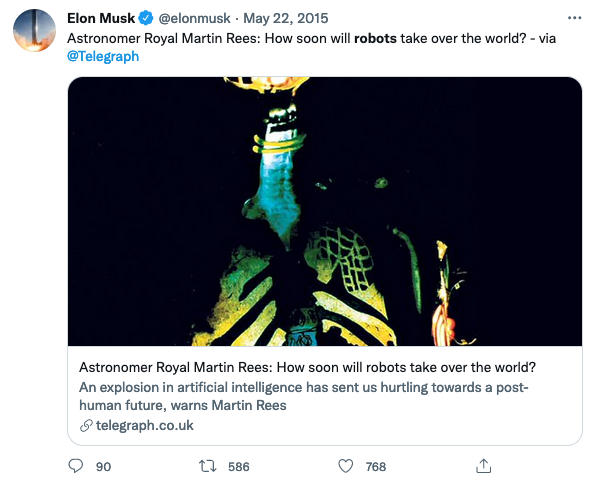 As you can see from the tweet – in 215 Elon was thinking about how robots will eventually take over from humans.

He has talked about this before in the context of artificial general intelligence (AGI) – an artificial intelligence that is significantly more capable than humans, and will recursively self improve in a short duration to accelerate the difference between it and us.

If we assume those further dates, then what that leaves time for in the interim is a human creator of robots to become the most dominant power on Earth.

That could be perceived on a military level, but also potentially on a civilian level too.

For example, imagine if Google put humanoid robots into every home, with a backdoor that could allow governments certain controls.

Therefore, if Tesla go into this business, they presumably see two opportunities to do it better than a less moral competitor: Your thinking seems holistic and logical, which seems sensible seeing you are thinking about terraforming a globe and possibly making another slightly more secure. For the second you are imagining accessing the agency of the market place. This of course is highly likely to be a natural thought for someone like EM given his involvement in shaping more than one. And this is a qualitative level (level 7) of thinking according to Elliott Jaques and BIoSS. Good stuff.