How I used world travel to deal with the anxiety of going bald, and move on from it successfully

I first wrote in 2013 about how I tried to beat hair loss. Then, after assessing all the various treatment options, decided the benefits (for me) did not outweigh the risks.

Next, I’d like to share with you whats worked for me in moving past my hair loss.

For those people still fighting the battle against hair loss, this post isn’t for you. Keep at it and good luck.

This is about the mental journey, not necessarily the physical one.

After I came to terms with the lack of good treatment options, I decided to shave my head and move on.

It took me some time to come to terms with the ‘bald me’. It was quite a shock at first.

Some people adjust quickly, and without issue, so this post isn’t for them.

Instead this post is for those people, like myself, whose identity is tied up in their body image, and are scared to face society without their hair.

First a little bit of history…

When I first found out I was going bald I was insistent I would find a solution. I would browse forums such as Hair Loss Help multiple times a day, constantly searching for more pieces of the puzzle in order to solve the hair loss riddle.

For some time the forums were both a lifeline and a curse.

The amount of bullshit and anecdotal advice flying around on there was, and still is, insane.

For example, I remember one post where someone was complaining about sebum build up on his scalp, and another poster recommended using ‘dawn dishwasher liquid and a scalp brush’.

In what sane world does that sound healthy?

But people on the forums are desperate, and desperate times call for desperate measures.

At the same time as all the nonsense, the forums provide hope and sanctuary for men going through what is on many levels a tough problem.

Back when I researched the problem, there were only 2 solid products on the market; finasteride and minoxidil.

Some people might argue 4, but generally speaking dutasteride has too many sides and nizoral isn’t essential.

Once you’ve tried these, you’re pretty much shit out of luck.

I suggest everyone who wants to fight baldness goes on their own mini crusade, I certainly did.

For some people the combination of finasteride and minoxidil will work without issue. For others, like myself, it will result in issues such as loss of energy and heart palpitations.

But it’s the best thing we’ve got, so it’s worth a look at least

You could then, like I did, try a whole host of other drugs (fluridil, spiro etc.).

Once you’re resigned to treatments not working, the next step is to face the challenge/fear of going bald. 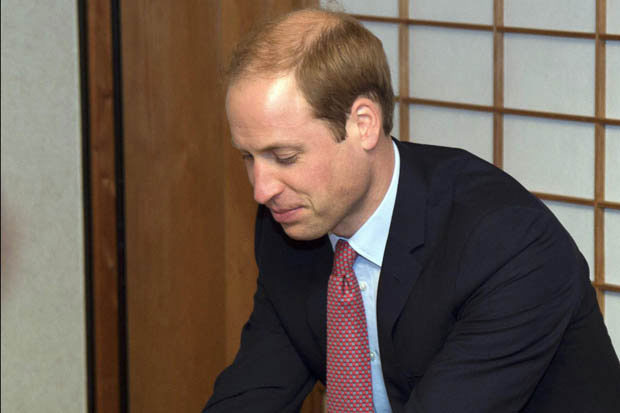 Even if your name is Prince William, it still isn’t a good look

For me, in this day and age, there really is only one solution. Face the problem head on and shave it all off.

Now I appreciate this comes down to personal taste, but at least in the society I grew up in; shaving the head is to own the issue, to go bald slowly is to fight fate.

Once you’ve shaved your head you can see what you look like, and can start to ‘deal with’ the issue.

You may be pleasantly surprised by the ‘new you’.

Hopefully your ego isn’t built around your body image, and the change isn’t a big deal.

If however, like me, you hated the way you look, then you may need to take further steps.

I was mortified when I saw myself in the mirror after shaving my head. For weeks I would look in the mirror and not recognise the man staring back. It made me look older, featureless, and I hated it.

I actually went through the process of shaving my head and then re-growing my hair twice before I took the plunge for good. The first time I was with a girlfriend, and that was the hardest.

Personally, my biggest issue, was dealing with meeting people around me who knew me as having hair.

In reality friends and family don’t really care, they’re so wrapped up in their own bubbles of worries and needs.

Sure, it’ll take them a bit of getting used to at first, but the real anxiety lies with you, inside your head.

If you don’t care, they certainly won’t.

So what I did, and it might sound drastic…

Was to coincide shaving my head with some world travel I had planned.

The rationale for it was thus:

So a couple days before I was due to fly to SE Asia, I shaved my head.

Even in a country where I knew no-one it took me a few weeks to get over the self conscious aspect of being bald. To stop getting a fright when I looked in the mirror.

One of the great things with travel is how little spare you have to dwell on personal issues. All the new foods, smells, tastes, people to meet and things to do provide constant distraction.

Travel was one of the best things I could have done

Meeting new people who accepted me the way I looked did wonders for my confidence.

They judge you for who you are right there and then, no history or former memories.

Sure, I’d rather have hair, but I no longer let being bald define who I am.

And that’s really what it’s about.

It’s completely normal and rational to prefer yourself as the youthful looking young chap with healthy follicles, much like you grew up with.

But where it becomes unhealthy, is when your hair (or lack of) defines who you are and crushes your confidence and self esteem.

So what’s the conclusion?

Everyone about to shave their head should take off to a foreign country?!

But if the issue becomes a huge deal in your life, then it’s an option worth looking at.

Besides, travel has a whole host of other benefits too!

I’d be curious to know if anyone else has done the same thing? How did you come to terms with your hair loss?